On Monday I celebrated my 20th anniversary of motherhood. I spent the day visiting my daughter who is a college Sophomore in Ithaca, NY. On the morning of her birthday I ran her college campus multiple times even though it was in the single digits and my phone would freeze unless it was flush against my skin to stay warm. The run was painful but I felt amazing.  During the college search process I promised myself that I wouldn’t support a college choice unless I could run during my visits. I set a goal to sprint up every hill in Ithaca by the time she graduates.

During this difficult run I was reminded of a question posed by my middle daughter almost 15 years ago. I can still remember her practicing her letters on our kitchen table.   She never lifted her head from the table during our entire conversation.   “Mom I know I got my math skills from my Auntie who is brilliant mathematician and I know I got my writing skills from my other Auntie who is a talented writer, but what did I get from you?” After running through a long list of possibilities, sense of humor and good looks were on the top of my list, she rejected every idea and finally said, “Don’t worry about it because you gave me the gift of life and that was enough”.

I love my girls and desperately want credit for everything. I know we are so different, however I like to think that in addition to the gift of life I gave my girls the gift of resilience.  They are masters of handling stress and moving forward. It is trait they all share and it is the backbone to their success. I’ve always viewed my life as teaching moment.

For years, I used my relationship with swimming as a guide to handle stress.  As a child swimming was not just my weakness, it was my greatest fear. I was so bad that I remember one frustrated instructor endorsed  the dog paddle as a reasonable path for some kids. During swim lessons I was satisfied to stand on the swim deck and watch my weak minded peers blindly follow the instructor.  I was never embarrassed about being difficult.

My islander parents would not accept my adversarial relationship with water as an excuse to not learn basic survival swimming. They worked for hours to help ease my worries and sent me to the best instructors in the area but nothing worked until I had one lesson with my dad.

My dad had a gift for patience and storytelling.  It was a unique combination that made him my first defense to any stressful situation. A conversation with my Dad could only be compared to taking a combination of the best anti depressant and anti anxiety pill with one side effect.  At the end of of every conversation I usually had a supreme inflated ego. My dad was so masterful in this role that during my most awkward years he convinced me that I was a brilliant academic who had a future as a Seventeen magazine cover model when I was actually  an uninspired student who looked like an overweight man-child (that’s the exact description my daughter bestowed on my middle school photo).

On one magical night he sat next to me in our backyard pool. He asked if I knew the secret to swimming, which of course I did not know and did not want to know. He said that I only needed to master one skill to be a great swimmer and then I was hooked on his lesson plan.  I could conquer my greatest fear by focusing on one thing.  Ok, sign me up!

He told me that he was one of the best swimmers on his island because he was an expert in floating.  Floating was his key to success because if he got tired he turned over on his back until he caught his breath. If the water got rough or his boat capsized he never fought the current instead he would float until he was strong enough to swim.   If you ever saw my dad in the water that man could float for days.  That night I mastered floating and conquered my fear.  I was also the oldest child to graduate into the advanced beginners swim session under the watchful eye of the famous Mrs Millican.

Floating was not only my trick to master swimming as a child, it became  my strategy for handling stress.  Getting bad news in my life was like getting hit by a storm in water. Some storms were more powerful but I could just float until I had the strength to swim.  My dad was in the water with me for most of the big storms. He was the great protector who would take the big blows and make sure I just felt the current that was left in the wake of the vicious waves.  I floated for years with his help and became a proficient swimmer. 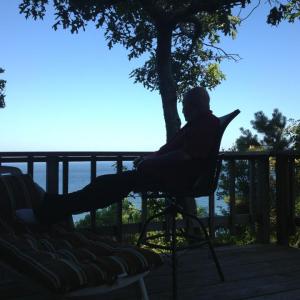 The pain of losing my dad hit me like a tsunami in unprotected waters. I realized that not only was he  protecting me from many of the big storms, he also had his hand under my back the entire time.  I was tricked into believing I was a gifted floater and masterful swimmer.

I lost my dad in December of 2013 and I was constantly gasping for breath and barely staying afloat in these new unchartered waters. My daughters rallied around me like a coat of arms and propelled me forward.  During my darkest days I had two girls getting ready for college.  The college process was already a unique time but this added an a new level of complexity.

I remember hearing about a relevant Slate article from one of the greats of our time, Rob Lowe,  regarding sending his first child to college. I always felt a strong connection with Rob since he spent so many years saying good night to me when he was a member of the Brat Pack.  His Teen Beat picture had a prominent place on my wall.  Other than that one awkward sex scandal, we were kindred spirits. I was excited to connect again.  I googled the article and it already looked promising with his beautifully chiseled face front and center.  By the second paragraph when he compared his son going off to college to the death of a parent I was out!  I felt betrayed by Rob.  I thought we had so much in common but I was going through the loss of a parent and sending a child to college at the same time and there was nothing similar.

While I was consumed with the grief of losing my dad, I was sandwiched between one freshman daughter in college and senior in high school. I traveled to watch my Freshman play her first scrimmage in her first softball game as a collegiate pitcher. She was living her dream and I had a front seat in her life. Her path to this field was a Greek tragedy with a shockingly happy ending.  I thought of my dad because he never loved the game but he loved his grandchildren and jumped at the opportunity to watch her play. He used to make the sign of the cross every time she struck someone out and once showed up during a practice to stare down a bad coach.  My dad could not resist swimming in her ocean.  I was thrilled to be there for her first scrimmage, but heartbroken I couldn’t call my dad.

I grabbed my winter jacket from the car to walk the fields of Ithaca because I wanted to hide my tears. I had not used the jacket for months and though it was not cold I felt compelled to be a little extra warm.  I was holding my husband and sobbing thinking of the past year.  I placed my hands in my jacket pocket and found my dad’s gloves. Here were his big grey fleece gloves in my hands and I felt him next to me.  Instantly, I went from barely staying afloat to this desire to swim, for the first time.

I went home from that trip and I was excited to look at colleges with my Senior in high school.  As I drove to multiple colleges I had an opportunity to connect with my girls and it became  clear that Rob Lowe was wrong about everything.  Watching my girls enter the next stage of their lives was the best gift in the world and it was the opposite of sad.  I cherished every second of motherhood even when I was in pain.

On my 20th anniversary of motherhood I was emotional thinking about how far we had come. I realized that I am not a naturally resilient person nor am I the best mother.  In reality, I am just smart enough to surround myself with remarkable people. My ocean has transformed because of the violent storms and I have weathered.  Those storms and the people in my life changed the landscape of my life in an extraordinary way.  Not only are my girls swimming next to me the entire time, they’ve inherited their masterful swimming skills from their grandfather.  As I sprinted up the hills of Ithaca, fighting against the wind, I felt blessed.

I have been a fitness professional for 16 years and foodaholic all my life. I transformed my health and fitness by changing my nutrition and workouts. I also used my personal experience to help clients transform their lives. I am eager to share what has worked for me. My next goal is to provide a weekly blog post. I will share how I handle stress and what motivates me to keep moving forward. Subscribe to my blog by adding your email address. You’ll be the first to hear about how I have shocked my doctors and friends!

February is My Fat Month